Link Wray was born Fred Lincoln Wray Jr. on May 2, 1929 in Dunn, North Carolina. USA. Link is of Shawnee heritage, he and his brothers grew up sleeping on floors. Both of his parents were preachers making his early reputation as supporting gang violence and motorcycle gangs ironic. As a child Link had a bout with the measles which damaged his eyesight, this coupled with tuberculosis which cost him a lung gave Link tremendous hurdles to jump into Rock & Roll stardom. It is reported that as a child he heard a local slide guitarist named Hambone, who had an influence on him.

In 1951, He was conscripted into the U.S. Army where he would serve in Germany and Korea. Fred Lincoln “Link” Wray Jr. is a Korea War veteran. His tuberculosis would be directly 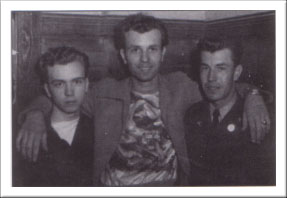 connected to his military service.

Following the war, together with his brothers Doug and Vernon as well as Shorty Horton and Dixie Neale, Lucky Wray and The Lazy Pine Wranglers were formed. Eventually they would become Lucky Wray and the Palomino Ranch Hands. The evolution into Link Wray and The Raymen would occur shortly thereafter. They got their start playing country songs and would become regulars on the Washington D.C. show Milt Grant’s House Party. In 1956 they made their first recordings for Starday Records. This was made difficult for Link spent much of 1956 in the hospital with complications from TB. They also backed Ricky Nelson and Antoine “Fats” Domino during this period.

In 1953, Link Wray and his brother Doug played at Hank Williams Sr.’s memorial at the request of Hank’s sister.

In 1958, came the first and biggest hit “Rumble”. The song originally named “Oddball” became known as “Rumble” as a reference to West Side Story street fights. Capital and Decca records both turned down the recording as did Starday but when it caught the ear of Archie Bleyer’s daughter she begged her father to record it. Archie Bleyer was the owner of Cadence Records. Despite being banned on many U.S. radio stations “Rumble” would peak at #16 on the Billboard charts. At this time an instrumental charting on the pop charts was rare. An instrumental being banned from airplay even more rare. Pete Townshend of The Who has been quoted as saying “He is the king, had it not been for Link Wray and “Rumble”, I would never have picked up a guitar.”

Following “Rumble” the band would also chart with “Jack the Ripper”, “Ace of Spades”, and “Rawhide.” Also popular were his versions of “Batman Theme”, “The Shadow Knows”, and “Run Chicken Run.” He made numerous recordings with Swan Records in the 60s being billed as a surf guitarist. His songs “Shawnee”, “Comanche”, and “Apache” would pay homage to his heritage. His 1950s and 60s image with gang violence infuriated record executives and he was forced to record with an orchestra.

His early popularity was followed by periods of retirement as well as multiple marriages and moving around. The 1970s would bring his return to touring with Rockabilly artist Robert Gordon. The 1970s and 1980s would also see numerous reissues of earlier material thus resulting in a resurgence of popularity with younger fans. Link Wray’s music has also been featured in many movies including: Pulp Fiction, Breathless, Independence Day, Desperado, and Twelve Monkeys among others. The 1970s saw Link record with such notables as Jerry Garcia, Commander Cody, and Boz Scaggs. These recordings were made with Polydor and Virgin records. His “I Got to Ramble” is dedicated to the memory of Duane Allman.

Bruce Springsteen wrote a song titled “Fire” and gave that to Link and Robert Gordon. The Who dedicated their song “Wasp Man” to Link Wray.

During the 1980s he often toured Europe and Australia. This followed a disenfranchisement with the American music scene. A very difficult to find live recording features a phenomenal cover of The Beatles’ “I Saw Her Standing There.” It was in Europe that he would eventually settle down with Olive Povlsen.

The 1990s brought him a resurgence in the United States when Quentin Tarantino featured two of his songs in Pulp Fiction, “Rumble” and “Ace of Spades.” Link Wray would once again return to touring in the U.S. with

Olive and a nitroglycerin capsule always close by. In his 70s, he proved to countless Americans that he should not ever be forgotten and could still rock.

Link Wray would pass away into the Rock & Roll heavens on November 5, 2005 in Copenhagen, Denmark with his wife Olive at his side.

That is one story, another has it that Link Wray was found alone and deceased in his Danish apartment by his son Oliver.

Perhaps only the God that Link Wray so faithfully believed in, will ever know the real truth.

On November 18, He would be buried at the Christian Church Cemetery in Christianshavn located near Copenhagen, Denmark. He was 76 years of age. He is survived by many descendants. Nine children including Oliver and 14 grandsons as well as 8 granddaughters. He also has a step great-grandson as of this writing.

Link Wray has thus far been shunned by The Rock and Roll Hall of Fame. Pete Townshend, Neil Young, Jeff Beck, Jimmy Page and Jimi Hendrix have all publicly cited Wray as having tremendous influence on their guitar playing styles. All are inductees into the Rock Hall. Also, many Punk, Hard Rock, Rockabilly, Country, Surf, and Heavy Metal artists have named Link Wray as an influence on their music. Rolling Stone Magazine listed him as one of the 100 greatest guitarists of all time. Uncut Magazine listed Link as 33rd of the 100 greatest guitarists of all time. Link was inducted into the Native American Music Hall of Fame in 2006. Also in 2006, Link Wray was awarded a Lifetime Achievement Award from The First Americans in the Arts. Link Wray along with his brothers Doug and Ray were inducted into the Southern Legends Hall of Fame in 2007. Former bandmate Shorty Horton is also an inductee. January 15th has officially been declared Link Wray Day in the state of Maryland. In June of 2009, the Library of Congress added ‘Rumble’ to the National Recording Registry.

Link Wray’s band The Raymen  based in the Washington D.C. area continue to play and record.

The X-Raymen contain other musicians that toured and recorded with Link. They are based out of The Netherlands.

Link Wray continues to influence multitudes of guitar players that seek out his tablature and to learn his distorted reverb power chord driven style. His music remains timeless.